A Superbowl for the ages 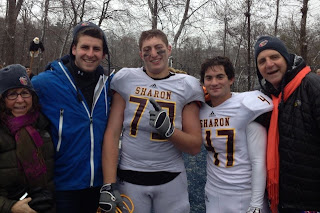 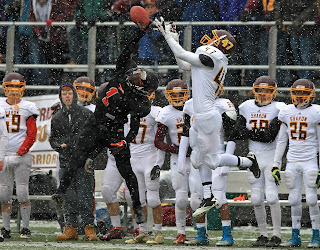 Caribou Nation, WHAT UP, we hope all is well!! This past Saturday with snow falling from the dark grey skies, the wind gusting from every direction, and thousands of fans lining the frozen tundra of Falcon Field at Bentley College, two high school football teams laid everything out for the division three crown.  It was the high flying offensive powerhouse of the Wayland Warriors vs. the ground and pound underdog story of the Sharon Eagles.  With variable conditions through the entire game, points were at a premium and the stakes were high.  Caribou past and present were scattered through the rosters on both sidelines.  For the Warriors it was Zack Aresty, Alex Noa, and Matthew Massicotte.  For the Eagles it was captain Adam Block and Bradley Kaufman.

Caribou was also represented in the stands as well.  On the Wayland side we saw Ian Reilly and Ben Penrose.  On the Sharon side we saw Cam and Ryan Baker, Dan and Sam Emmerman, Brett Seigal, Tyler Usen, Ben and Nick Stamm.  Also in attendance was Tyler Swartz!

It was a back and forth affair with both offenses struggling to move the football.  The reliable passing game for the Warriors was stunted by the aggressive quarterback pressure put on by Adam Block.  Even when the Wayland quarterback was able to get a throw off, cornerback Bradley Kaufman was waiting to swat the ball down.  It was a 1-2 punch that Sharon rode until the final whistle blew.  Final score 12-3 for Sharons first ever Super Bowl win.

We want to congratulate both teams and all of our Caribou guys for competing in a tremendous game.  We’re very proud of all you guys.

We want to wish all of Caribou Nation a happy holiday season.  Keep in touch.  199 days until camp begins!! BOU YAH