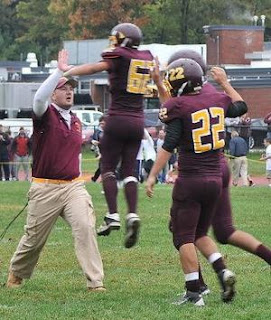 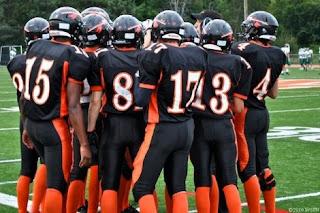 What’s up Caribou Nation, it’s Friday and we’re bloggin’ about some big time news!!  As some of you may know already, Wayland (home of the Lermans) and Sharon (home of the Kaufmans Blocks, Stamms, Bakers, and Emmermans) are squaring off in the Division 3 Superbowl at Bentley College this Saturday at 10am.  The underdog story of the 9-3 Sharon Eagles are going against the high powered machine of the 9-3 Wayland Warriors.  The game will be close, however, Rotman feels the team that is able to brave the chilly and wet weather will be hoisting the trophy and planning a ticker tape parade.  Bill, Bobby and Rotman will be at this heavyweight title and hope to see other Caribou guys from Wayland, Sharon, and any other towns in the area at the game.  We want to wish Adam Block and Bradley Kaufman of Sharon and Zack Aresty, Alex Noa, and Matthew Massicotte of Wayland all the best as they compete for the MIAA championship.

In other Caribou news, Bill and Bobby have been down to New York and Connecticut meeting with loads of new Caribou families.  Rotman has been going to tons of baseball and football games around the Boston area. Ross Grant is getting really excited for the upcoming summer! Currently Ross is studying sports and excercise science, rooting the New York Giants, and training for the 2013 Colorwar. Ross wanted to
mention that he believes he would make a great TE in the NFL and believes that the Texans will win the Super Bowl. Peter Rabinovitz is playing tons hockey and studying real hard at Beaver Country Day. We also wanted to mention that Ryan Scott will be coming back to the ‘Bou in 2013.
We hope to see tons of you guys at the game tomorrow. Let’s keep in touch and have a great holiday season.