A Bat Mitzvah and A Music Man 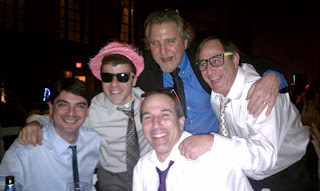 Caribou Nation, what uppppp!!! What a crazy MLK weekend we had. It started out with a BANG at Abagail Rosovsky’s Bat Mitzvah (Rosedog’s Daughter). Held at Temple Israel in Boston on Saturday, Caribou came out in full force. Dan Rottenberg, Mike Stern, Charlie Fradin, Barry Gu, Bill, Martha, lori, and Rotman were all in attendance, creating one raucous and fun table!!!! Though Abagail was the star of the day as she did an outstanding job and threw an amazing party. It was also a little precursor to this summers Alumni Reunion. It was great to see some Caribou guys get together, but everyone was certainly excited for the main event on August 12th. In the end, we all want to thank the Rosovsky’s for an awesome day!!!

On Sunday, as you know the Pats played the Jets in the divisional round of the playoffs. Being a Pats fan, that game was certainly tough to watch and I really don’t want to talk about it, but Weinstein came into Boston to watch the game with me. It was great to see him, even though he was wearing a Jets long sleeve shirt and a Grey Colorwar under shirt (hahah of course) but he is doing real well up at Union College covering the 12th ranked hockey team in the nation!!!

On Monday, Lori and Rotman went to see Aaron Cohen perform in The Music Man. Aaron started the play off with a solid break dance routine, it was SICK!!!!! Aaron definitely set the tone of the play, as the Schechter school put on a great show. And just fair warning to all of you, I’m sure Aaron will bring those break dance talents to this summers lip sync, so watch out!!! We just want to thank Robin Cohen for inviting us, as it was great to see Aaron.

Also in attendance at the play was our very own MILES BACKER, who also goes to Solomon Schechter. Miles is doing very well and pumped for the summer.

Hey, it was a great weekend, awesome to see our Alumni and some current guys. Keep in touch and let us know of any upcoming events.